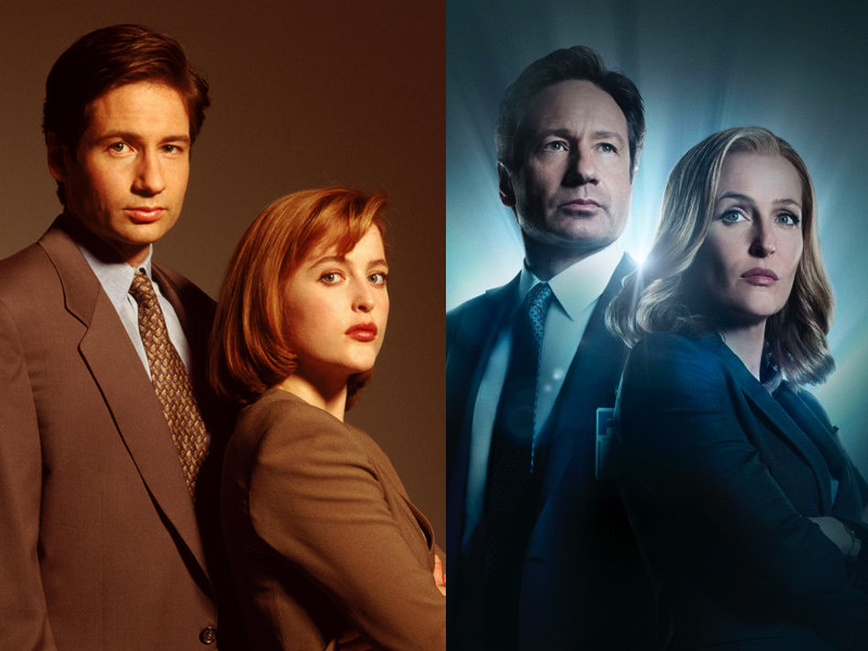 The X-Files is coming back to FOX on Jan. for a “limited series event” of six hour-long episodes, and I’ve been in a fragile emotional state for months. The original series ran from 1993-2002, starting four years before and ending five years after I was born. David Duchovny and Gillian Anderson star as Fox Mulder and Dana Scully, two FBI agents sequestered in the basement of the Hoover building in D.C. as the sole investigators of the titular X-Files — the FBI’s throwaway division for unsolved cases that could be read as paranormal. Mulder and Scully’s distinctive dichotomy, the idealistic male believer and no-nonsense, female skeptic, influenced boring network crime dramas with will-they-or-won’t-they straight couples for years to come.

The show ran for nine seasons, with a big-budget feature film sandwiched between seasons five and six. A number of older fans jumped ship after the movie, when the show’s production moved from Vancouver to Los Angeles and took a turn for the light-hearted. In the first half of its life, The X-Files signature was constant gloom, courtesy of the Pacific Northwest, and the brooding isolation of Mulder and Scully’s solitary quest. They were steely faces etched by long shadows of conspiracy, “two flashlight beams crossed in the dark.” It was a show that proved it could bring legitimate horror fiction to primetime television and trickle insidious doubt into a Clinton-era public conscious. Two-thirds of the show was “Monster-of-the-Week” episodes, where Mulder and Scully crossed America to investigate sleepy, death-laden towns, and the other third was dedicated to its ongoing “mythology” arc focused on an alien colonization conspiracy. That moody paranoia borrowed from All the President’s Men  arrived at the heels of the Cold War, and in our post-9/11, Edward Snowden, UFOs over Los Angeles world, The X-Files is in top form to make a comeback.

I only ever caught snatches of episodes at a time, and since I was barely cognizant, they were from the show’s period of steady decline. Episodes characterized by David Duchovny’s absence, two new agents, and a ridiculous alien Messiah plot line. I would pass, uncomprehending, through the living room as my mother played The X-Files for white noise and steal glimpses of Dana Scully, one of my first crushes. I’ve had ample time to binge it on Netflix since, so here are 10 of my favorite episodes.

Vince Gilligan, the man behind Breaking Bad, got his start as a nerdy NYU film student who, by familial coincidence, dumb luck, and a lot of talent, joined the writing staff of The X-Files in season 3. His first contribution was a freelance script called “Soft Light”, starring Tony Shaloub as a tormented scientist who’s literally afraid of his own shadow, which moves independently and kills people.

Gilligan was 27 at the time and the baby of the team, often bringing odd, borderline ridiculous ideas to the table. His comedic vampire episode “Bad Blood” is a fan favorite for its unreliably-narrated exploration of Mulder and Scully’s working relationship. and memorable guest appearances from Luke Wilson and Ham from The Sandlot.

But Gilligan’s greatest episode, or at least most historically significant, is season six’s “Drive“, starring Bryan Cranston. It was Cranston’s performance in “Drive” that remained in Gilligan’s memory when creating Breaking Bad. Season six and everything onward is frustratingly light on conspiracy, but some stand-alone episodes are worth it. “Drive” originated from a long-standing episode idea that Gilligan pitched for years, wherein a man holds a hostage on a Tilt-a-Whirl. Other writers laughed at him and told him it wasn’t an X-File, but he persisted. The Tilt-a-Whirl became a car, the hostage became Mulder, and Cranston’s character became a tragic figure. Years before Breaking Bad and before Malcolm in the Middle, Cranston proved his dramatic aptitude as an unlikable, feral man driven by desperation.

“Clyde Bruckman’s Final Repose” is often tapped as the best episode of The X-Files episode ever, and I’m not about to argue. Frank from Everybody Loves Raymond guest stars as a life insurance salesman who can predict the exact circumstances of anyone’s death. The episode approaches the topic lightly before arriving at a bittersweet end.

However, I’ve never seen “Oubliette” on any popular source’s list of favorites. It’s striking, not for any creative feat, but for its emotional core. Mulder’s belief in the paranormal is derived from the disappearance of his sister Samantha when he was 10 years old, which he attributed to alien abduction. “Oubliette” deals with a woman who shares a psychic connection to a kidnapped schoolgirl. She’d been kidnapped by the same man years before, and her link is of special interest to Mulder and Scully. Her interactions with Mulder reveal a great deal about the interior life of our protagonist, and David Duchovny’s performance is breathtaking.

“The Post-Modern Prometheus” isn’t a fantastic episode. As the title implies, its script incorporates post-modern narrative technique, such as genre parody and breaking the fourth wall. The episode is shot in black-and-white in an affectionate tribute to James Whale’s Frankenstein, the cast apart from Mulder and Scully is bland, but it’s all worth it for the questionably necessary Cher concert at the end.

The X-Files lost sight of its conspiracy vibe after four or five seasons, but it remains one of my favorite things about the show, and it was at full force all through season 1. The pilot’s tracking shots of 5’3″ Scully navigating the FBI recall Jodie Foster in The Silence of the Lambs, and Mulder and Scully’s fateful first case brings them to rainy Oregon, where someone is methodically killing alien abductees. We’re introduced to the Cigarette-Smoking Man, the most visible member of the series’ shadow government conspiracy. In the second episode, we meet Deep Throat, a mysterious man named for the Watergate source’s pseudonym who leaks information to Mulder with Obi-Wan-level vagueness. Throughout season one, we see Scully slowly dragged into Mulder’s quest until it becomes her own, and the series finale “The Erlenmeyer Flask” boasts a high body count and enough unanswered questions to frustrate fans for the next decade and beyond.

The X-Files revival series will feature four Monster-of-the-Week episodes bookended by two mythology episodes. Early critic’s reactions have been mixed, but slanted by nostalgia. I don’t predict any satisfying resolution the the disaster that the mythology plot became in later seasons, but as long as Mulder and Scully are together, I’ll be fine.

The Circle: France is Your Next Quarantine Binge Show

Does it Hold Up? Looking back at 'Good Burger'