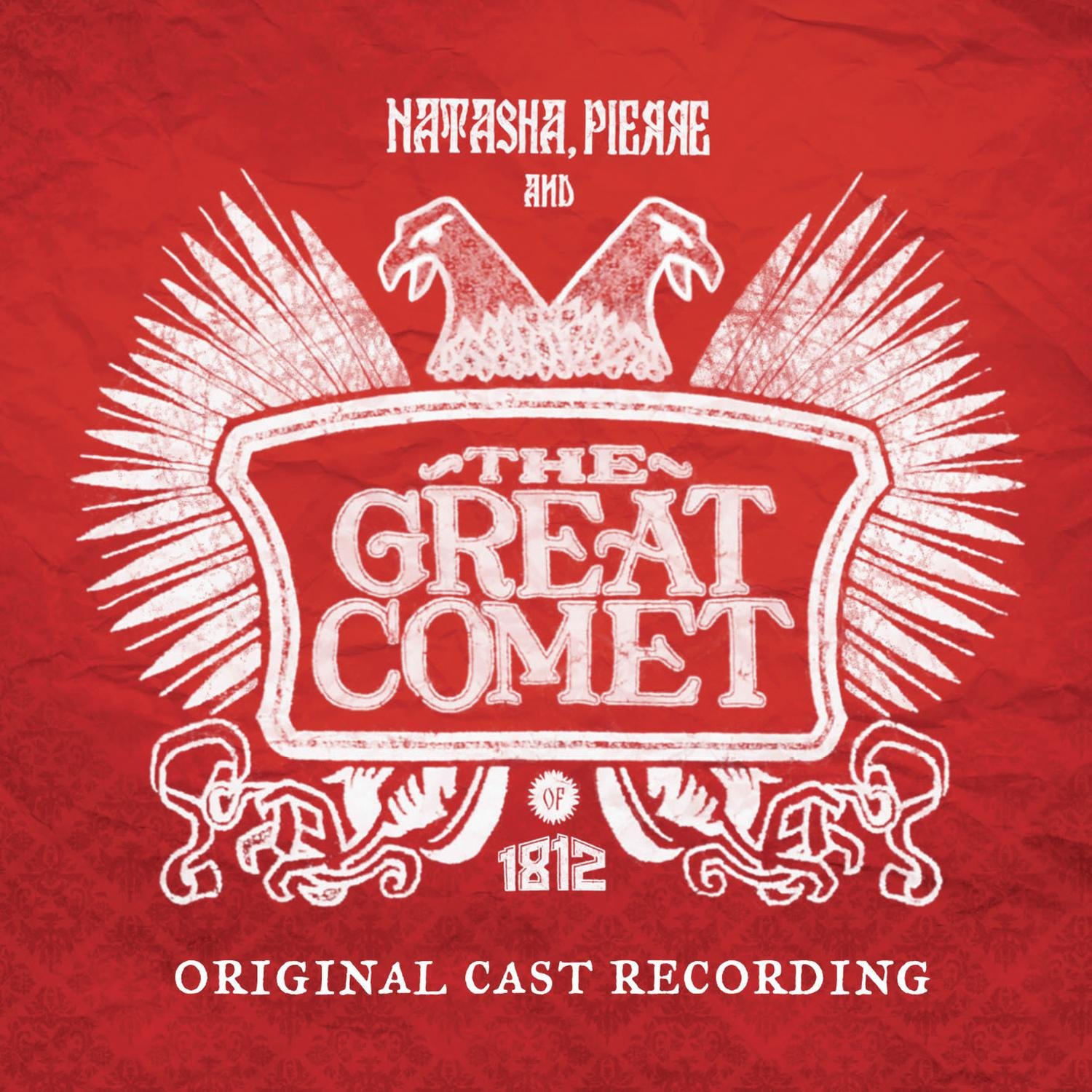 Described as an “electropop opera”, the original cast recording of Natasha, Pierre & The Great Comet of 1812 is a wild ride. It’s a musical adaptation of a small section of War and Peace by New York-based composer and performer Dave Malloy, which opened off-Broadway in 2013. It was about as off-Broadway as you can get without getting off-off. Staged in the mobile, custom pop-up theater/restaurant Kazino, audience members were served Eastern European food and booze while actors weaved between tables to recount a slim section of Tolstoy’s brick-sized classic.

This album has been saved in my Spotify for two years, back when the show was playing and had buzz. I finally gave it a listen because Natasha is played by Phillipa Soo, the love of my life, who is also currently on Broadway in Hamilton as Elizabeth Schuyler Hamilton. Having created the roles of both Natasha and Eliza, Phillipa is truly putting every young actress to shame. One year out of Juilliard, she headlined The Great Comet, and now her Tony for Best Lead Actress in a Musical is nearly secure.

I came for Phillipa, but I stayed for Dave Malloy. At the young age of 38, he’s already written the music for 11 musicals, and The Great Comet was only the start. “Electropop opera” has to be one of the coolest descriptions I’ve ever heard in my life. The genres Malloy explores in his score may seem disparate, but his infusion is masterful, between opera, EDM, rock, indie pop, and East European folk music, like in the information-packed “The Duel” and deceptively titled “The Opera”.

The libretto to The Great Comet is sung-through in the tradition of Les Miserables, but with the variation, novelty, and altogether superior conception to spare it that agony. Long stretches of lyric are quoted word-for-word from Aylmer and Louise Maude’s popular English translation of War and Peace from 1922. The text is largely Romantic in vocabulary, and its absolute refusal to rhyme sets The Great Comet‘s book apart from every one of its peers. This makes for some weird moments where the characters narrate their own actions in third person, but it works. I haven’t tried to read War and Peace because I love myself, but since finding The Great Comet, I’ve read corresponding excerpts, and this musical is truly a plain musical setting in moments.

Natasha, Pierre & The Great Comet of 1812 covers Book VIII of War and Peace–the thwarted elopement of Natasha Rostov and Anatole Kuragin. I don’t know how to summarize this plot, because it’s nigh on impossible. Yes, War and Peace is a doorstopper, but a well-constructed, tightly-plotted doorstopper with intricacies that I shouldn’t skip over. I linked to CliffsNotes, if anyone wants more detail. The gist: Natasha is engaged to Andrey, who’s away fighting Napoleon. She goes to the opera in Moscow and is seduced by Anatole, whose sister is Helene, who is married to Natasha’s childhood friend Pierre, a newly-rich, newlywed bastard going through a series of existential crises.

The “Prologue” attempts to ease the audience into the middle of War and Peace with “It’s a complicated Russian novel / Everyone’s got nine different names / So look it up in your programs / We appreciate it / Thanks a lot.” The substantial cast is introduced cumulatively like the Twelve Days of Christmas. This is one of a handful of songs with completely original lyrics by Malloy, because I doubt Tolstoy described Andrey’s family as “totally messed up.”

A very conventional accordion ushers us into the Prologue, which I love, but I jam out hardest to the very long, very expository song “The Duel”, which experiences some pretty intense genre mixing. EDM, Slavonic dances, what have you. “Gonna drink tonight / Gonna drink tonight / Gonna drink tonight gonna / Drink drink.” Malloy lays a rousing Russian drinking chorus over the puncturing beat of house music, and it’s glorious. Anatole is trying to get his brother-in-law Pierre to drink himself into oblivion while out with other people, instead of alone at home like usual.

As for other songs, the tempo marking in the score for “Natasha and Bolkonskys” describes it as a “dirty reggae groove.” Another one of my favorite tracks is “The Ball,” the act I finale, where Anatole seduces Natasha. It features a standard classical Russian waltz as they dance, and devolves into electro drums and sirens with Natasha’s confusion and distress at her new, taboo feelings. I’m also a huge fan of “Balaga,” a largely comic folk dance about its famous titular troika driver who “drives mad at 12 miles per hour.” And the finale, “The Great Comet of 1812”, is a gorgeous, conventional choral piece that, strangely, ends on a dissonant electronic tone, suggesting the rest of the story is yet to come.

Phillipa Soo’s Natasha is one of few truly enviable soprano roles written in recent memory, and Lucas Steele’s clear tenor reaches notes far above the staff that should sound ridiculous, but don’t, much like Anatole’s specifically mentioned swagger. Brittain Ashford, predominantly an indie musician, brings a peculiar, un-theatrical voice to Natasha’s cousin Sonya. She seems to waver in mumbles that belong over nothing more powerful than an acoustic guitar, but breaks into a wonderfully dark, throaty belt that defies all expectations. What makes The Great Comet for me is Dave Malloy himself as Pierre. His gravelly voice matches “dear, bewildered, and awkward Pierre” to a tee, and the contrast between him and Steele’s Anatole add even more character to the players of Tolstoy’s epic.

Natasha, Pierrre & The Great Comet of 1812 never achieves the hummability of more traditional musicals, but it doesn’t aspire to. It’s a sprawling, dense, fast-paced narrative that never lets up, and the score combined with its unlyrical lyrics is a challenging vocal mammoth. The combination of apt casting and tight writing makes for a seamless and immersive listening experience. I don’t have money or a time machine, but I feel confident in calling this one of my favorite musical scores based on its album alone.

So This is Goth? A Beginner’s Guide to the World of Goth Music

Indiana Begins New Year with Win Over Maryland, Looks Ahead to Wisconsin