Starting with this piece, I will be breaking down some of my personal favorite rock albums of the last 50 years that I think have fallen through the cracks of rock history. I won’t be doing Abbey Road or Pet Sounds, although some of my chosen albums will be from notable artists. The main point I want to make is that all of these albums that I’ll cover were very influential in the evolution of Rock ‘n’ Roll, whether they were received as such or not.

For my inaugural FRG (forgotten rock gem), I will break down the self-titled debut album by the band known more for their extreme makeup and stage presence than their music, KISS (1974). I have owned this album on vinyl for nearly half a year, but just got around to playing it several weeks ago. It blew my expectations out of the water. Never listening to much KISS besides their popular radio songs and Dr. Pepper commercials, I basically only knew them from their famous stage makeup and their serpentine tongues. 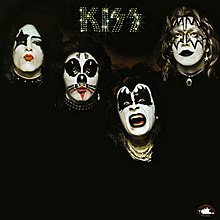 Anyway, let’s get to the album itself. Kicking off the album and the band’s career, “Strutter” is perhaps the best song on the album (although there is some heavy competition). This track is extremely pleasing to the ears, which is not an easy feat when still giving off a heavy sound. This song, as representative of the whole album, is guitar-based at its best moments, with a crazy guitar solo at the 1:45 mark, which leads back into memorable sing-along lyrics. Also, Paul Stanley provides fantastic vocals that fit the rhythmic guitar play in a perfect way. Just listen to the song (and the whole album while you’re at it), I can only praise it so much.

The second song on the album, “Nothin’ To Lose” provides a fantastic opening composition, with some much-appreciated cowbell and guitar work. However, the most memorable part of this song is mid-chorus (when everything cuts except for light drums and vocals, “Ya got, ya got, ya got nothin’ to lose!”, followed by a killer riff. The vocals sound chillingly John Lennon-screaming-esque, a sound I thought impossible to replicate until I heard “Nothin’ to Lose.”

I could write a lot about every song on the album, but I will just write briefly on the other notable songs. “Firehouse”,”Cold Gin”, and “Let Me Know” provide even more memorable guitar riffs and soothing lead vocals, while “Deuce” is one of the band’s most popular songs ever, as it is has been used as a concert opener for decades. The most unique song on the album, for obvious reasons, is “Love Them from Kiss”. It does not feature vocals of any kind, so it is entirely instrument-based. This is not a bad thing at all, as I think it is musically one of the strongest songs of the album. Finally, Kiss ends with “Black Diamond”, a song which features the only acoustic guitar on the album and soft vocals in a beautiful opening sequence. The song then goes off the deep end as it quickly goes heavy as we expect in a KISS song. At the 2:50 mark, the song delivers maybe the best guitar solo of the album, and then transitions to long, distorted, drawn-out notes that progressively get heavier in sound to end the group’s debut album. It is a fitting end to an album that I think further evolved hard rock and glam rock, although it is tough to classify this album in a certain genre (you’ll know what I mean). One of the many amazing facts about this album is that band members have said it only took anywhere from two to three weeks to record in its entirety, which is barely any time at all relative to the music recording industry. So, in conclusion, do yourself a favor: Lock yourself in your room, listen to Kiss in its entirety, preferably on vinyl, as I find any music sounds best on vinyl, and be awed by songs that have slipped through the cracks of rock history. You will not regret it!

If anyone has any suggestions on albums you think are an FRG, feel free to email me at jmappes@iu,edu or tweet me @jwmappes. Enjoy the album!

Out on the street for a living
Picture’s only begun
Got you under their thumb
Hit it!

Stars Are Blind by Paris Hilton: The Hero We Need